Around 60 inmates from the St. Louis Justice Center started a riot late Sunday, local media report citing police. Videos from the scene show a crowd gathering outside as prisoners smash windows and throw out various objects.

Video from the scene shows several people in prison robes throwing out objects through busted windows on the third floor of the St. Louis Justice Center. Local media reported chairs and tables were tossed out.

This is *not* under control pic.twitter.com/SweX6MQpVP

The inmates were filmed holding up a ‘Help Us’ sign as police arrived on scene to assist corrections officers.

Another prison outbreak in the St Louis jails. The prison system is inherently flawed. The over-policing, over-incarceration & and the under appreciation of the human body needs to end. We can no longer neglect the injustices of our incarcerated siblings. pic.twitter.com/OXiBDIN77l

TV channel KTVI FOX 2 News quoted police as saying that around 60 inmates are involved in the riot. 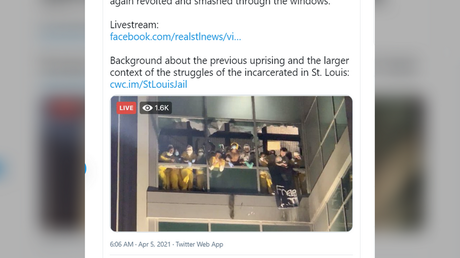 All-Star Game yanked from Georgia in response to voting law

WHO boss warns against pandemic fatigue as numbers rise