DUBAI, 25th February, 2021 (WAM) — Saqr Ghobash, Speaker of the Federal National Council (FNC), highlighted the importance of strengthening the joint parliamentary work of Arab parliaments to creating a joint Arab parliamentary vision for countering foreign interventions in the affairs of Arab countries.
He made this statement during his speech at the 27th Arab Inter-Parliamentary Union (AIPU) Executive Committee meeting, which he chaired and inaugurated remotely today from the FNC Secretariat-General’s headquarters in Dubai.
The meeting was attended by representatives of Arab parliamentary divisions from the AIPU Executive Committee, as well as Fayez Al Shawabkeh, AIPU Secretary-General, and several FNC members.
During the meeting, Ghobash stressed the importance of modernising the AIPU’s work, noting that the organisation represents the keenness of Arab peoples to serve mutual Arab interests.
The UAE’s leadership and people aim to develop the mechanisms of joint Arab action, which will influence the region’s development and security, he added, affirming that the UAE, under the leadership of President His Highness Sheikh Khalifa bin Zayed Al Nahyan, has adopted policies of coexistence, tolerance and openness to other cultures, enabling the region to achieve further stability, peace and security.
He also pointed out the importance of reinforcing joint Arab action to counter foreign interventions in the internal affairs of Arab countries, which cause increased tensions and conflicts in the region and multiple threats to the security of Arab countries. He stressed that this matter poses major risks to joint Arab security, and foreign countries intervening in the internal affairs of Arab countries support terrorist groups and promote extremist ideas to divide the Arab world.
Ghobash further added that despite the growing security, political and health challenges, there is still hope and optimism in reducing the repercussions of such challenges, affirming that there are meetings taking place in Cairo, Egypt to prepare for the upcoming Palestinian elections.
He then expressed his best wishes to the Libyan people for a successful political settlement and unity and stability in Libya.
The Riyadh Accord and the formation of the new government in Yemen represent a real opportunity to end the crisis in the country, in line with related United Nations (UN) Resolutions and GCC initiatives, most notably UN Security Council Resolution No.2219, he explained, noting the agreement of Syrian parties to resume talks in Geneva. 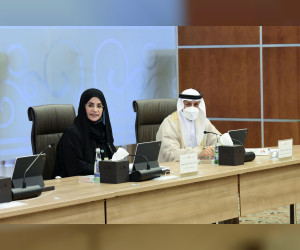