ABU DHABI, 11th January, 2021 (WAM) — Saqr Ghobash, Speaker of the Federal National Council (FNC) and Current President of the Arab Inter-Parliamentary Union ( AIPU), highlighted the key role of the Inter-Parliamentary Union (IPU) in ensuring stability, peace and security in the Middle East, through preserving the principles of national sovereignty, preventing interference in the internal affairs of states, countering terrorism, promoting the values of tolerance among the world’s peoples, encouraging nuclear disarmament, and respecting the principles of international law when resolving regional disputes, most notably the Palestinian issue.
Ghobash made this statement during his speech at the first coordination meeting held today by Duarte Pacheco, the newly-elected IPU President, with the union’s geopolitical groups, which was held remotely. The meeting was also attended by Dr. Omar Al Nuaimi, Secretary-General of the FNC, and Afraa Al Basty, Assistant Secretary-General for Parliamentary Communication.
During the meeting, Ghobash said that the world is expecting significant efforts from parliaments during the recovery period from the coronavirus pandemic, adding that the IPU has prioritised two important issues in its 2021 agenda, with the first being its role in ensuring the fair distribution of coronavirus vaccines to the world’s peoples, and the second being the role of national and regional parliaments in drafting legislation aimed at monitoring government efforts to accelerate the world economy’s recovery and support the most affected economic sectors, as well as in providing governmental support for the health sector, to enable it to address national, regional and global health challenges. 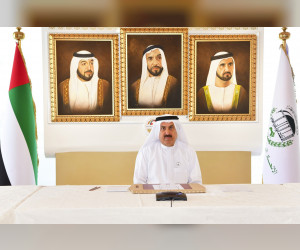