SHARJAH, 22th December, 2020 (WAM) — The Sharjah Chamber of Commerce & Industry, SCCI, in cooperation with Sharjah Police, announced the launch of community awareness campaign about the security of the facilities in Sharjah’s industrial zones, under the themed “Your business safety is a key to its flourishment”.
The campaign, which lasts for a whole year, aims to raise awareness among owners of industrial establishments with the most important measures that must be followed to enhance the security and safety of their facilities, which contributes to reducing crime rates, protecting against theft accidents, and enhancing a sense of security and safety.
This was announced at a press conference attended by Ziyad Mahmoud Al Hajji, Member of the Board of Directors of the SCCI, Lieutenant Colonel Jassem Al Suwaidi, Head of the Community Police Department in Sharjah, Lt Col Muhammed Hassan Abdullah, head of community awareness section, Community Department, Ibrahim Rashid Al Jarwan, Director of the Economic Relations and Marketing Department in the SCCI, Jamal Bouzengal Director of the Media Department in the SCCI, and Lalu Samuel, Chairman of the Representative Committee of the Industry Sector Business Group, and representatives of the relevant departments from both sides.
The session touched on the most important measures that should be followed to safeguard the industrial facilities.
This includes keeping an eye on security and safety systems and procedures, installing high-quality surveillance cameras that cover and monitor the largest area possible, installing fire alarm systems, hiring qualified and well-trained security guards, and making sure that the facility is closed properly at the end of official working hours.
Lauding the tremendous efforts exerted by Sharjah Police to ensure security stability, as an essential factor and catalyst for economic prosperity and sustainable development, Ziyad Mahmoud Al Hajji pointed to the importance of the campaign in enhancing awareness about the measures that have to be taken to protect the facilities and strengthen stability in the industrial areas.
“We, at the SCCI, are committed to playing an active role in making the emirate’s economic life flourish, in cooperation with the competent authorities and institutions and through the joint work with different community sectors,” he added.
Ibrahim Rashid Al Jarwan affirmed the Chamber’s keenness to enhance the effective partnership between security authorities and business sector facilities to create a safer environment and to augment Sharjah’s pioneering position as a safe economic destination.
In turn, Lalu Samuel highlighted the importance of the campaign in enhancing knowledge of the security and safety measures in industrial facilities and fostering a safe environment for production, transportation, and storage. 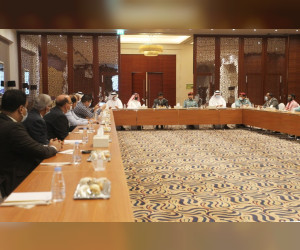