Scott Walker was caught red-handed in an Italian food-themed blunder while trying to encourage Americans to support their local restaurants.

On Saturday, the day after Christmas, seemingly trying to lead by example, Walker posted on Twitter “Great pizza tonight at San Giorgio Pizzeria Napoletana. We have to support our local restaurants and small businesses!”, along with a picture of a delicious-looking sausage-topped pizza.

Great pizza tonight at San Giorgio Pizzeria Napoletana. We have to support our local restaurants and small businesses! pic.twitter.com/uvMityyraH

However, savvy social media users were quick to point out that the picture of Walker’s pizza had actually been taken from another post he had made over a year previously, in October 2019.

This is a picture of a pizza you had in 2019. pic.twitter.com/ZfW8iOoNiX

Former Missouri secretary of state Jason Kander alleged that Walker wanted to convey the image of supporting local restaurants during the Covid-19 pandemic without “actually risking his health” by going to the restaurant and taking a new photograph.

Holy heck. @ScottWalker wanted to appear to be supporting in-person dining without actually risking his health by going to a restaurant so he tweeted out a picture of a pizza he ate in 2019 and pretended he went out to a restaurant and ate it tonight. #WhatATool https://t.co/uy9MVRBJrJ

“People lie about the dumbest things,” wrote former Obama administration official Brandon Friedman, while others called the tweet “embarrassing” and “the saddest thing ever seen on Twitter.”

People lie about the dumbest things. Here is Republican @ScottWalker (who has been caught lying before) posting a photo of his “great pizza tonight.” Next to it is the uncropped version of the same pizza, in a photo he posted last year. pic.twitter.com/LvDkw0I5H7

Many users questioned why Walker would feel the need to lie about a pizza he had eaten that evening.

And it wasn’t the first time Walker had found himself at the center of a pizza-related controversy. In July 2019, he was ridiculed for posting a picture of a “veggie pizza” that bore little resemblance to the iconic Italian fare.

Walker’s 2019 ‘pizza’ was called “horrifying” and “grim,” and journalist Ken Klippenstein questioned why the former governor couldn’t just enjoy his wealth and leave the rest of the country in peace. 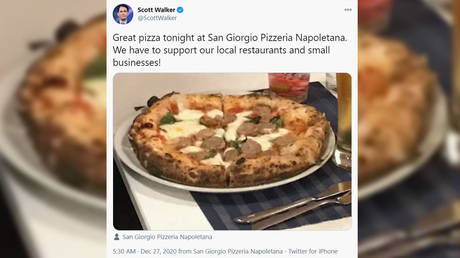