SHARJAH, 31st December 2020 (WAM) – Sharjah Municipality (SM) inaugurated Thursday a major sewage pumping station in Al Soor area after renovation and replacement of the old station, which was established in 1977. The new high capacity station aims to keep pace with urban planning in Al Soor in accordance with the modern requirements.
The inauguration of the station was attended by Thabet Al Tarifi, Director General of Sharjah Municipality, assistants director general, and a number of municipal officials.
Al Tarifi confirmed that the station renewal was carried out in cooperation with an American powerhouse to test and ensure the effectiveness of the design by the municipality’s team through the flows programme, which had a positive impact on reducing the cost from AED37 million to AED5 million, indicating that the municipality is keen to enhance its role in providing the best services and developing its various projects in line with the great development in the Smiling Emirate and the population growth, as the station is considered one of the most important stations that serve several areas, including Jubail, Al Nad, Al Qasimia and Al Soor. It also serves many new vital installations in the area and other commercial buildings.
He explained that the capacity of the station has been raised to 2,500 cubic metres compared to 500 before rehabilitation in line with the urban boom and population increase in that area. He pointed out that the project is considered one of the vital projects and a strategic achievement undertaken by the municipality during the current year, due to its importance in diverting wastewater from residential areas served by the station to the main treatment plant.
For his part, Eng. Hassan Al Taffaq, Assistant Director-General for Agriculture and Environment at SM, indicated that the station is controlled and monitored remotely through the electronic “SCADA” system in the main control room, which reflects the municipality’s keenness to promote digital transformation in the provision of services and the completion of various projects. He added that the new station is considered one of the permanent solutions to face the pressure due to its limited capacity.
Al Taffaq confirmed that there are 8 main pumping stations in the City of Sharjah that work according to advanced systems, all of which pump sewage water to the main treatment plant, according to the best international specifications. This, he added, reflects the municipality’s keenness to develop infrastructure and service and support the urban and civilisational renaissance in the emirate. 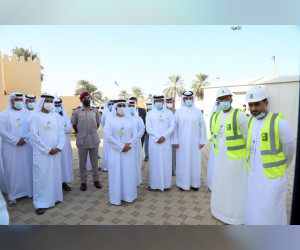