SHARJAH, 20th December 2020 (WAM) – H.H. Dr. Sheikh Sultan bin Muhammad Al Qasimi, Supreme Council Member and Ruler of Sharjah, opened on Sunday the Abu Bakr Al Siddiq Mosque in Khorfakkan.
After the unveiling of the curtain to mark the opening of the mosque, His Highness was briefed on the service facilities, which includes a prayer hall that can accommodate 1,250 worshipers and prayer halls, including a prayer hall for 250 women, in addition to ablution and toilets, housing for the imam, a library and other facilities.
The mosque, which was built at the expense of Sheikha Sheikha bint Muhammad Al Qasimi, was built on an area of 1,860 square metres, according to the modern architectural style mixed with the heritage character.
The mosque consists of a ground floor in addition to the mezzanine of the women’s prayer hall, and it contains six entrances, including three main entrances, two side entrances, and a private entrance for the imam, as well as two minarets with a height of 38 metres and a large dome.
The opening was attended by Sheikh Salem bin Abdulrahman Al Qasimi, Chairman of the Sharjah Ruler’s Office, Mohammed Obaid Al Zaabi, Head of Protocol and Hospitality Department, Abdullah Khalifa Yarouf Al Sabousi, Director of the Directorate of Islamic Affairs in Sharjah, and a number of department officials. 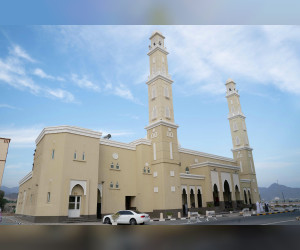