Online activist group Sleeping Giants has demanded Apple and Google remove Twitter alternative Parler from their app stores, insisting it violates their policies on incitement to violence. But they’ve given other apps a pass.

Google’s Play Store bans apps that “depict or facilitate gratuitous violence or other dangerous activities,” including “graphic depictions or descriptions of realistic violence or violent threats to any person or animal,” Sleeping Giants posted on Twitter on Friday, insisting Parler had run afoul of these guidelines.

Yesterday, we asked @AppStore and @GooglePlay to enforce their own Terms of Service on Parler based on the sheer number of violent threats on the platform with #PullParler.

Look at the VERY CLEAR terms set by these two app stores below: https://t.co/SpPuSCUxy4

The group complained that Parler wasn’t following Google’s rules on “bullying and harassment,” though it wasn’t entirely clear which of those rules Parler had supposedly broken. “Bullying victims of international or religious conflicts,” blackmail/extortion, “posting content in order to humiliate someone publicly,” and “harassing victims, or their friends and families, of a tragic event” are declared off limits according to the policy.

Rules against “promot[ing] violence, or incit[ing] hatred against individuals or groups” based on protected characteristics like ethnicity, gender, sexual orientation, or age were also thrust into the Play Store’s face, with Sleeping Giants reminding the company that Google “created these rules *themselves*” and thus has no excuse for not enforcing them.

Apple, too, got the public shaming treatment, with Sleeping Giants complaining it lacks a means of filtering “objectionable material” and a way to “report offensive content and timely responses to concerns” as required by the App Store’s own guidelines.

Posting a few screenshots of Parler content and insisting “this isn’t free speech. This is a real threat,” Sleeping Giants reminded both companies that it had gotten Gab — another right-leaning microblogging platform for those booted off Twitter —  removed from both Play Store and App Store in 2017 for related reasons.

There is precedent for this enforcement on both of these platforms, with @AppStore turning away Gab and @GooglePlay banning the same app in 2017 for very similar content to Parler.

They should apply the same principles here.#PullParler

Insisting that “words matter,” the group lamented that “Calls to violence turn into real violence.”

No corporations should aid apps openly allowing calls to violence, let alone those speaking out against it.

As we now know, words matter. Calls to violence turn into real violence.@AppStore and @GooglePlay need to #PullParler. pic.twitter.com/iO8Av0lt1t

However, many on social media pointed out that Parler’s supposed crimes had been committed by Facebook and Twitter too, crying foul at Sleeping Giants’ double standards. “By this very same metric, Twitter should also be pulled, no?” one user asked.

This very tweet, and the actions Sleeping Giants is taking, the tactics they are using are 100% violations of exactly what they claiming Parler is guilty of. They are inciting violence, hate speech, political insurrection, targeting political enemies, extortion, and much more!

You did this for #Twitter and #Facebook too right? All social media is what you described Parler as. Or are you a just wanting to control your oppositions speech? #techtyrants

A OK for BLM and Antifa to murder and burn though. We all see. Over 30 innocent civilians dead, 700+ police injured? $200+ billion in property damage. #ChinaShill pic.twitter.com/7vW0M0saTc

Others skipped the pleasantries and went straight to accusations of totalitarianism.

You really only want your rhetoric don’t you.
Communism at its finest.

Parler — along with Facebook and Twitter — has been blamed for inciting a mob of apparent Trump supporters to burst into the Capitol while Electoral College votes were being tallied on Wednesday. Many of the demonstration’s leaders had already been kicked off larger social media platforms and thus communicated via Parler. Five people died amidst the rioting, which has been used to demand further censorship on social media. 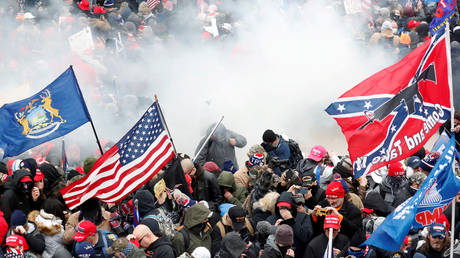