The five members of the Harris County Commissioners Court in Texas have approved a resolution calling for the pardon of the late George Floyd, who was arrested there for selling $10-worth of crack in 2004.

“I think this is a phenomenal opportunity to fix a miscarriage of justice in George’s case,” Tera Brown, Floyd’s cousin, said on Tuesday before officials made their votes.

A pardon request was officially made last month, and Governor Greg Abbott will ultimately have the final say on the matter.

“No matter how you feel about Mr Floyd, about his life or his death, Mr Floyd does not deserve to have this stain and take a wrongful conviction on his record,” Allison Mathis, an attorney with the Harris County Public Defender’s Office and the one who filed the pardon request to the Texas Board of Pardons and Paroles, said.

Floyd was arrested in February of 2004 for selling crack during a police sting in Houston. He would eventually plead guilty to a drug charge and spend 10 months behind bars. The arresting officer in the matter, however, is now facing two counts of felony murder stemming from a different drug case.

Former police Officer Gerald Goines is facing murder charges for the deaths of Dennis Tuttle and Rhogena Nicholas, both of whom died in a 2019 drug raid. Prosecutors allege Goines made up an informant who stated they’d bought drugs at the house he was raiding. More than 160 convictions tied to the former officer have been dismissed.

Floyd was killed last year after being detained by former Minneapolis police officer Derek Chauvin, who was convicted of his murder in April. Video showing Chauvin kneeling on Floyd’s neck while he was in custody and on the ground sparked immediate outrage when it went public, with people taking to the streets to protest Floyd’s murder in numerous cities across the US. 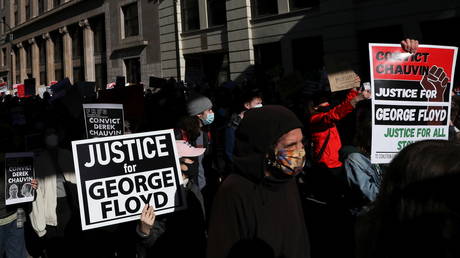 ‘She was so little:’ Mom delivers premature ‘miracle’ baby in car during Texas storm

‘It had a piece of my face in his mouth’: Hickman County man gets...