Florida Governor Ron DeSantis has ordered more than 600 National Guard troops to return home from Washington, DC following controversial reports of soldiers being forced out of the Capitol and into parking garages.

DeSantis questioned the reason for troops being in DC at all, calling it a “half-cocked mission at this point” during a Friday appearance on ‘Fox & Friends’.

“They are soldiers,” the governor said. “They are not Nancy Pelosi’s servants.”

Over 20,000 soldiers were brought to DC following the US Capitol riot on January 6, and many remained in place for Joe Biden’s recent inauguration.

Many people expressed outrage this week after it was reported that hundreds of soldiers were told to leave the US Capitol, where they had been housed for weeks, and to find accommodations elsewhere, with some having to resort to nearby parking garages.

Hours after the story broke and numerous politicians voiced their disapproval of the treatment, US Capitol Police apologized and allowed the Guardsmen back into the building.

It was an honor to witness Henry Sayler receive his first dose of the vaccine today. Florida is rapidly approaching a monumental milestone of 1 million seniors vaccinated. #SeniorsFirst pic.twitter.com/JoL6N1ybOH

The governor took issue with reports that the FBI was vetting soldiers for extremist political beliefs ahead of Biden’s inauguration. This led to 12 soldiers being removed from the assignment over statements made in social media posts or through text.

“(In) Florida, we did not let them go into their political beliefs,” he said. “I thought that was totally inappropriate. I thought it was very disrespectful for people who are clearly patriots.”

I have instructed General Norris to order the return of the Texas National Guard to our state. @TexasGuard

According to a new report from Politico, Guardsmen flying in and out of DC have led to worries of a Covid spread, with some troops being pressured to leave quarantines early to report for duty and others having to resort to getting their own tests. Military leadership has not revealed if any have tested positive from the trip, but reports indicate the conditions troops have had to deal with have prevented them from adhering to social distancing and other pandemic safety precautions.

“We did not get Covid tests on arrival,” one anonymous Guardsman said. “Right after the holidays they packed us together like sardines in buses and rooms for this.” 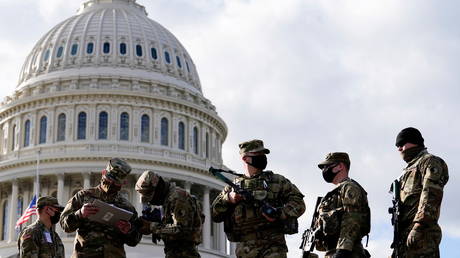 Al Ghadeer exhibition at the Sheikh Zayed Festival highlights efforts of 200 craftswomen in...

Up and down temperatures this week

We will commemorate fifty years of Union by celebrating arrival to Mars: Mohammed bin...