Residents in Whatcom County, Washington have been ordered to evacuate after a train carrying a load of crude oil derailed and caught fire, with local authorities clearing anyone within a half-mile of the crash site.

The derailment late on Tuesday morning involved three to five cars, the BNSF railway said in a statement on Twitter, adding that there were reports of a fire near the end of the vehicle and that emergency response crews were working to “assess and mitigate the situation.”

.@wsdot_traffic cameras show what appears to be a significant fire from an oil train derailment north of Ferndale in Whatcom County, WA. Evacuations of surrounding area recently ordered. 2020 is not through with us yet😮. https://t.co/RfeeypeRPc pic.twitter.com/DNG0BT1kfF

The evacuation was also announced online by a public relations officer for the Washington State Patrol, who urged all “residents and visitors” to leave the immediate area around the tanker. The evacuation zone includes an elementary school, a church and multiple businesses.

Hi, someone who just happened to be in the area at the time of the fire here, it started just about noon , and here’s some photos I got while we were coming back from Birch Bay. Shaken! pic.twitter.com/m2AX6JM0mY

A thick plume of black smoke was seen billowing from the crash site in footage published by a local reporter.

Video from scene of train derailment near Custer. (Courtesy Anthony Near) #Q13FOX pic.twitter.com/Fks3XlYpUZ

Images captured closer-up showed flames around the tanker, though the extent of the blaze is not clear from the photo.

Picture from scene of train derailment near Custer, WA. Brandi Coplen says her kids were at a play date when it happened. Kids, pets (plus pet bunny) evacuated the area. #Q13FOX pic.twitter.com/LwxxsBMKqW

The pillar of smoke could also be seen in satellite imagery shared by local meteorologist Morgan Palmer, who noted that surface winds in the area are “fairly calm.”

It has not yet been determined what caused the accident, and no injuries have been reported as of yet. The crash took place in Custer, a small town with a population fewer than 400 located just miles from the US-Canada border.

BNSF is working with local authorities to assess and mitigate the situation. The cause of the incident is under investigation. Our first priority is dealing with any safety issues. We will provide additional details as they become available. (2/2) 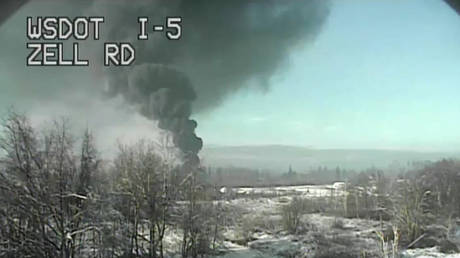 US charges 3 North Koreans with hack on Seth Rogen/James Franco movie and stealing...