After releasing a video condemning the Capitol Hill riot and apparently finally conceding to Joe Biden, President Donald Trump promised his supporters that his political movement will “have a GIANT VOICE long into the future.”

“The 75,000,000 great American Patriots who voted for me, AMERICA FIRST, and MAKE AMERICA GREAT AGAIN, will have a GIANT VOICE long into the future,” he tweeted on Friday. “They will not be disrespected or treated unfairly in any way, shape or form!!!”

The 75,000,000 great American Patriots who voted for me, AMERICA FIRST, and MAKE AMERICA GREAT AGAIN, will have a GIANT VOICE long into the future. They will not be disrespected or treated unfairly in any way, shape or form!!!

In a video address the evening before, Trump condemned what he called a “heinous attack” by his supporters on the US Capitol on Wednesday. In a speech to crowds of supporters in DC on Wednesday, Trump urged his followers to “peacefully and patriotically make your voices heard” outside the Capitol.

However, the crowd soon pushed inside the building, vandalizing lawmakers’ offices and clashing with police. An unarmed protester was shot by police, a police officer was injured by protesters and later died, and three other people suffered “medical emergencies” and died.

Trump’s video address, however, led some of his supporters to accuse the president of treating them unfairly. They attacked Trump for throwing them “under the bus” by calling for their prosecution, and for capitulating to Biden after promising to “never” give up contesting the presidential election.

Aside from his video address and Friday morning tweet, Trump has been inactive on Twitter since Wednesday’s events. Twitter locked him out for 12 hours for allegedly inciting violence, while other social networks, among them Facebook, Instagram and Twitch, have all booted the president off their platforms indefinitely.

On the political front, Democrats have drafted articles of impeachment against Trump, with a vote possible as early as next week. Failing a successful impeachment vote and a swift removal, Trump will leave office on January 20. 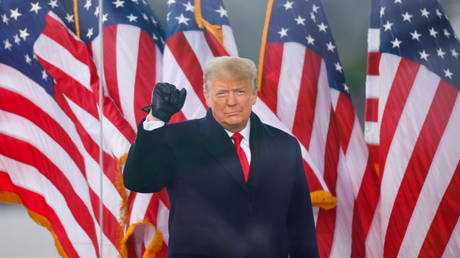