Trump says he ‘unequivocally’ condemns attack on US Capitol, vows to ensure safe transition in 1st message after impeachment

Shortly after the House voted to impeach him for the second time, President Donald Trump decried the assault on the US Capitol by his supporters, saying that those who participated in the unrest “attacked” his movement as well.

In a video message posted to official White House account on Twitter on Wednesday, Trump struck a conciliatory tone, urging Americans to “overcome the passions of the moment and join together as one American people,” while disavowing those who resorted to violence in the name of his cause.

If you do any of these things, you are not supporting our movement, you are attacking it, and you’re attacking our country

Trump noted that the January 6 mayhem that saw a crowd of his supporters forcing their way into the Capitol, “angered and appalled millions of Americans across the political spectrum.” He signalled he shares the same sentiment about the riot, that left five people dead.

I want to be clear. I unequivocally condemn the violence we saw last week

Trump, who has a week left in the Oval Office before President-elect Joe Biden’s inauguration on January 20, said that he will see that those who took part in the unrest are brought to justice. Referring to the deployment of thousands of National Guard members in Washington, DC, ahead of the inauguration, Trump said that everything will be done to “secure the city and ensure that a transition can occur safely and without incident.”

Although the video was posted about two hours after the Democrat-dominated House voted to impeach him over “inciting” an “armed rebellion” against the country, Trump fell short of mentioning the vote or a looming trial in the Senate, which is likely to drag into Biden’s presidency.

However, Trump, who has just become the only president to be impeached twice, took aim at the widening crackdown by established social media platforms, such as Facebook, Twitter and YouTube against him and his supporters. Trump was booted off Twitter, and his official accounts were suspended on Facebook and YouTube in wake of the Capitol chaos.

“What is needed now is for us to listen to one another, not to silence one another,” Trump said, denouncing an  “unprecedented assault on free speech” by tech giants. 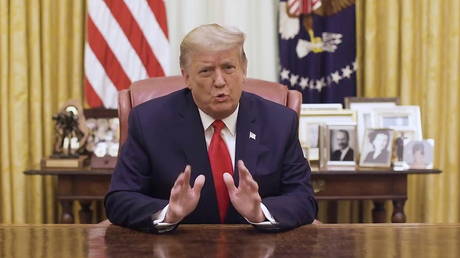 The Parler precedent? Lawsuit calls on Google to drop Telegram from app store, a week after Apple was targeted in the same way

The Parler precedent? Lawsuit calls on Google to drop Telegram from app store, a week after Apple was targeted in the same way