President Trump has signed into law a $2.3 trillion package, averting a partial government shutdown, after lawmakers rejected his proposal to increase direct aid to Americans while cutting out a slew of aid for foreign countries.

“I will sign the Omnibus and Covid package with a strong message that makes clear to Congress that wasteful items need to be removed,” Trump said in a statement.

I will send back to Congress a redlined version, item by item, accompanied by the formal rescission request to Congress insisting that those funds be removed from the bill.

On Tuesday, Trump threatened to veto a $2.3 trillion spending package that allocates $900 billion for coronavirus relief, and $1.4 trillion in other government spending, calling it a “disgrace” and demanding that direct payments be upped to $2,000 per individual from the current $600.

In justification of his sudden U-turn on Sunday, Trump explained he was “signing this bill to restore unemployment benefits, stop evictions, provide rental assistance, add money for PPP, return our airline workers back to work, add substantially more money for vaccine distribution, and much more.”

The House is set to “vote to increase payments to individuals from $600 to $2,000” on Monday, and Trump hopes that the Senate not only “will start the process for a vote that increases checks to $2,000,” but also “repeals Section 230, and starts an investigation into voter fraud.”

While both parties are seemingly on board with the $2,000 payments, they nevertheless blocked Trump’s initiative, demanding he first sign an existing deal they finally managed to reach after months of negotiations. The Democrat-controlled House delayed passing a relief bill in the run-up to the November 3 election. Only with Joe Biden declared victorious, Congress was cleared to finally come together on a relief package, and any new agreement seems unlikely until Biden is scheduled to be inaugurated on January 20. 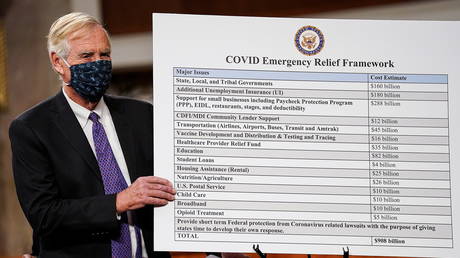