US President Donald Trump has confirmed he will address the crowds gathering in Washington, DC as Congress prepares to certify the election, while warning the ‘terrorist organization’ Antifa to stay away.

“Stay out of Washington,” Trump tweeted on Tuesday evening, calling Antifa a “terrorist organization.” He added the law enforcement is watching “very closely” and tagged the FBI, the Defense Department, the Justice Department, Homeland Security and Interior – which runs the US Park Police, responsible for federal property in DC – in the tweet.

He also confirmed that he would address the ‘Save America’ rally at 11am local time on Wednesday, urging “big crowds” to arrive early as “doors” to the Ellipse – an open space on the south side of the White House – will open at 7 in the morning.

I will be speaking at the SAVE AMERICA RALLY tomorrow on the Ellipse at 11AM Eastern. Arrive early — doors open at 7AM Eastern. BIG CROWDS! pic.twitter.com/k4blXESc0c

Thousands of the president’s supporters have arrived in the US capital ahead of Wednesday’s joint session of Congress that is expected to certify the election of Democrat Joe Biden as president, even as 150 or so Republican lawmakers said they would object.

Trump appears to be expecting Vice President Mike Pence to “reject fraudulently chosen electors,” meaning the delegations from five states in which his campaign alleged misconduct in administering the vote and even outright fraud.

In a series of tweets on Tuesday, Trump said he hoped the Democrats will take notice of the protesters who “won’t stand for a landslide election victory to be stolen.” Even more importantly, he said, the “weak and ineffective RINO [Republican in Name Only] section of the Republican Party” should pay attention.

He tagged Senate Majority Leader Mitch McConnell (R-Kentucky), and Senators John Cornyn (R-Texas) and John Thune (R-South Dakota), all of whom have refused to back his challenge to the legitimacy of the November 3 election and urged the party to move on into the Biden presidency.

“Washington is being inundated with people who don’t want to see an election victory stolen by emboldened Radical Left Democrats,” Trump tweeted. “Our Country has had enough, they won’t take it anymore! We hear you (and love you) from the Oval Office. MAKE AMERICA GREAT AGAIN!”

Washington is being inundated with people who don’t want to see an election victory stolen by emboldened Radical Left Democrats. Our Country has had enough, they won’t take it anymore! We hear you (and love you) from the Oval Office. MAKE AMERICA GREAT AGAIN!

His social media manager Dan Scavino took the “hear you and love you” literally, tweeting out a short video in which music and chanting of protesters could be heard from the West Wing.

DC Mayor Muriel Bowser, a Democrat, has requested the National Guard as backup and urged residents to refrain from engaging with protesters who “come to our city seeking confrontation.”

Meanwhile, DC police arrested Proud Boys leader Enrique Tarrio, who flew into the capital to take part in the Trump rally. Tarrio was arrested for “destruction of property” – referring to the Proud Boys destroying a Black Lives Matter during a protest last month – but then additionally charged with possession of “two high-capacity firearm magazines,” though no weapon for them.

A DC judge has ordered Tarrio to stay away from the District entirely, citing his own social media posts admitting to torching a BLM banner and saying he’d “do it again,” and noting there are such signs and murals all over the city. 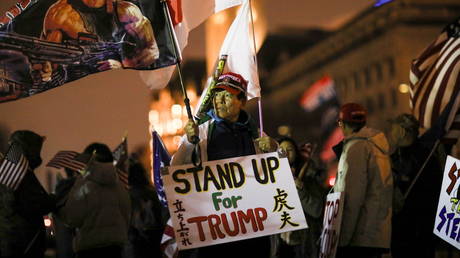 Colleges across the nation, including Ohio State, cancel spring break in response to pandemic