Calling the storming of the US Capitol “appalling, reprehensible, and antithetical to the American way,” White House press secretary Kayleigh McEnany said the Trump administration was committed to orderly transfer of power.

In brief remarks to the White House press corps on Thursday, McEnany said that President Donald Trump and his administration condemned the events of the day before “in the strongest possible terms,” and compared them to the June riots outside the White House, which she also condemned.

Democrats have accused Trump of “inciting” the protesters who stormed the Capitol grounds on Wednesday, and called their actions “sedition” and “insurrection.” A number of demonstrators eventually breached the building and interrupted the joint session of Congress meeting to certify the election of Democrat Joe Biden as the next US president.

“What we say yesterday was a group of violent rioters undermining the legitimate First Amendment rights of the many thousands who came to peacefully have voices heard in our nation’s capital,” said McEnany. “Those who violently besieged our Capitol are the opposite of everything this administration stands for.”

Everyone at the White House is working to ensure an orderly transition of power, she said, confirming a statement to that effect released by Trump around 4 am on Thursday.

“Now it is time for America to unite, to come together, to reject the violence that we have seen. We are one American people, under God,” McEnany said, echoing the Biden-Harris camp rhetoric.

She left without taking questions from the assembled reporters, who shouted demands to hear Trump make the condemnation himself. 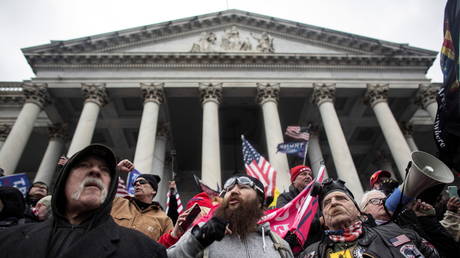