DUBAI, 4th January, 2021 (WAM) — Suhail bin Mohammed Al Mazrouei, Minister of Energy and Infrastructure, stated that the UAE has prioritised infrastructure development projects around the country, to improve road quality, reinforce the country’s global competitiveness, and continue the implementation of development projects that support the national economy and development process.
In his statement today, Al Mazrouei said that advancing the country’s infrastructure and road network is among the priorities of President His Highness Sheikh Khalifa bin Zayed Al Nahyan; His Highness Sheikh Mohammed bin Rashid Al Maktoum, Vice President, Prime Minister and Ruler of Dubai; His Highness Sheikh Mohamed bin Zayed Al Nahyan, Crown Prince of Abu Dhabi and Deputy Supreme Commander of the UAE Armed Forces, and Their Highnesses Supreme Council Members and Rulers of the Emirates, which enhanced the country’s stature in global competitiveness indexes.
He then commended the unlimited support of the Follow-Up Committee of the Initiatives of the UAE President and the role of its projects in improving the UAE’s infrastructure.
The Ministry of Energy and Infrastructure, in cooperation with the committee and local governments, is keen to implement a federal road network that will improve the country’s infrastructure and the link between cities and residential communities, including the final phase of the 7-kilometre “Emirates Road” (Ring Road) that passes through Ras Al Khaimah, which was launched by the ministry and financed by the committee. 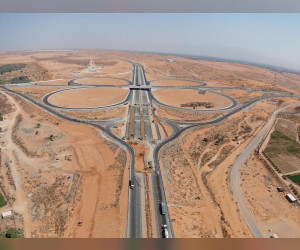