ABU DHABI, 24th February, 2021 (WAM) — The United Arab Emirates will celebrate, tomorrow, the 60th National Day of Kuwait, which underscores the close ties and strong strategic partnership between the two countries.
The UAE will host a series of distinguished activities to celebrate the annual National Day of Kuwait, which takes place on 25th February. The celebrations will include illuminating the country’s key landmarks with the Kuwaiti flag and decorating shopping malls in all emirates with congratulation messages, in addition to organising cultural events.
The strategic partnership between the UAE and Kuwait is witnessing continuous political, economic, social and cultural advancement, supported by their leaderships, represented by President His Highness Sheikh Khalifa bin Zayed Al Nahyan and His Highness Sheikh Nawaf Al Ahmad Al Jaber Al Sabah, the Emir of Kuwait.
Agreements and partnerships

In light of the profound bilateral ties between the two countries, the UAE and Kuwait signed an agreement to form a joint bilateral cooperation committee in 2006 in Kuwait City. The committee held several meetings, which involved the signing of several programmes and agreements, most notably an environmental programme for 2014 to 2015, a cultural and technical executive programme agreement for 2013, 2014 and 2015, a cooperation programme between their ministries of foreign affairs in diplomatic training and research, a joint cooperation protocol between their chambers of commerce and industry, and a Memorandum of Understanding (MoU) between their securities and commodities authorities.
Economic cooperation

The UAE and Kuwait have signed many MoUs and agreements related to economic and commercial cooperation, which maximised the value of investments and trade between the two countries. Their non-oil trade exchange increased from US$7 billion in 2006 to $10.5 billion in 2019.
Statistics from Emirati and Kuwaiti airline companies highlight the fact that before the coronavirus pandemic, there were nearly 180 to 200 weekly flights between the two countries while estimates point out that 400,000 to 500,000 Kuwaiti tourists visit the UAE annually.
The cultural relations between the UAE and Kuwait reflect their profound mutual history. They also signed many cultural and academic agreements, supported by mutual cultural and academic visits aimed at exchanging expertise and encouraging cooperation.
Private universities in the UAE have attracted Kuwaiti students who have found them to be convenient alternatives to European and American universities and the number of Kuwaiti students enrolled in Emirati universities has witnessed a significant increase. Emirati students also study in Kuwaiti universities and institutes. 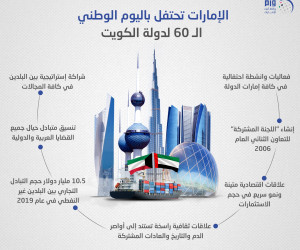 Anti-lockdown Tennessee pastor tells mask-wearers they are not welcome: ‘I’m not playing these Democrat games’

Woman accused of leaving children in vehicle pleads not guilty

Sex offender charged with murder in death of Iowa girl, 10

Amid pandemic, pope goes to Iraq to rally fading Christians