ABU DHABI, 8th January, 2021 (WAM) — LAS VEGAS and ABU DHABI – UFC, the world’s premier mixed martial arts organisation, and the Department of Culture and Tourism – Abu Dhabi (DCT Abu Dhabi) will partner for the third instalment of the world-famous UFC FIGHT ISLAND series, which will kick off the UFC’s live event series in 2021.
The UFC will host three events in just seven days at Yas Island, Abu Dhabi, for a limited number of fans at the Etihad Arena.
The first event of 2021, on Saturday, 16th January, will be a fan favourite featherweight bout between No.1 ranked Max Holloway and No. 6 Calvin Kattar. On Wednesday, 20th January, Michael Chiesa will take on Neil Magny in a welterweight event. Closing out the UFC FIGHT ISLAND Triple Header will be UFC 257, which will see Conor McGregor in a rematch against Dustin Poirier.
UFC President, Dana White, said, “I am pumped to start the year with a straight week of great fights – Saturday, Wednesday and Sunday – for fight fans all over the world with FIGHT ISLAND Triple Header.”
“Following two highly-successful editions of UFC Fight Island and the recent Formula One Etihad Airways Abu Dhabi Grand Prix, Abu Dhabi has repeatedly demonstrated its ability to host major international events in a safe and secure environment this year.”
“The third staging of UFC Fight Island not only cements Abu Dhabi’s standing as a world-class global destination for sports, but as one of the safest,” added Ali Al Shaiba, Executive Director of Tourism and Marketing at the Department of Culture and Tourism – Abu Dhabi (DCT Abu Dhabi).
Nouf Al Bouhselaibi, Director of Destination Management at Miral, commented, “Hosting UFC Fight Island Triple Header on Yas Island has been a testament to the success from the first edition and a reflection of the island’s growing reputation as a global destination for entertainment, leisure, and business.”
To align with safety guidelines, the athletes, coaches, UFC staff and resort employees will again be in a safe zone on Yas Island. There will also be additional restricted zones for fans to attend the events. The sale of limited tickets began today from 10:00 at etihadarena.ae and ticketmaster.ae.
The event will be showcased live via global broadcasters around the world and on Pay-Per-View in select markets. UFC events are broadcast in 171 countries and territories in 40 different languages and reach approximately one billion TV households.
In the UAE and throughout the rest of the Middle East and North Africa, the UFC content is broadcast on Abu Dhabi Sports and streamed on UFC Arabia, UFC’s first Arabic-language streaming subscription service in the region. “UFC Arabia” can be downloaded through Apple Store and Google Play and is available on the web, smartphone, tablets and Smart TVs. 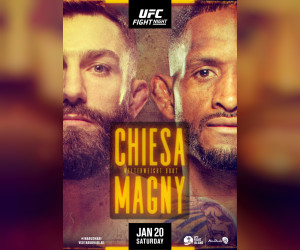