Customs and Border Patrol are demanding sweeping new surveillance powers at all US entry points, potentially exposing visitors to unprecedented plundering of their private info by law enforcement and even foreign governments.

The agency has demanded a massive expansion of facial recognition data collection at airports, land ports, and seaports, measures the American Civil Liberties Union and a coalition of over a dozen other advocacy groups have condemned as wildly and unnecessarily intrusive, discriminatory and illegal in an objection filed on Monday.

The groups have also argued that the dramatic expansion of CBP’s data-collection powers – centering on souped-up facial recognition tech – runs counter to the intent of Congress when it first authorized biometric data collection from people entering the country back in 1996.

CBP doesn’t just want to collect photos of international travelers, as the ACLU’s filing makes clear. They’re seeking the authority to collect “‘faceprints’ – precise measurements of [a person’s] unique facial geometry” that are “largely immutable” and, unlike fingerprints, can be collected without a person’s knowledge or consent.

These will be stored in a database for 75 years, where they can be accessed by local and federal law enforcement agencies and even foreign governments for purposes “far removed from the reasons for CBP’s initial collection,” the filing warns. The border patrol agency admitted in its privacy assessment that faceprints will be screened against the terrorist watchlist (notoriously – and admittedly – bloated with non-terrorists), outstanding warrants, and other databases – many of which contain significantly more private information about individuals than what they willingly provide to enter the US.

Thus, not only could the massive faceprint hoard enable US law enforcement and foreign governments to surveil an individual’s entry and exit into the country – it could “expose where people go, who they associate with, and even what they believe, based on the religious services, protests, or meetings they attend.”

Agencies could even match faceprints to archival or live footage – of protests or religious gatherings, for example – chilling individuals’ right to freedom of speech and association. And with the Department of Homeland Security recently proposing “continuous vetting” of immigrants, the technology could be deposed to track new arrivals wherever they go, even if they are not suspected of committing a crime. Hackers, too, could have a field day with such a data trove.

Facial recognition technology is imperfect at best, a factor that disproportionately affects non-white people, transgender individuals, and very young or very old people. The first mistaken-identity arrest due to faulty facial recognition saw a black man locked up in his own front yard in Detroit earlier this year, and the ACLU doubts it will be the last. Black and Asian people are up to 100 times more likely to be misidentified by popular facial recognition systems, according to the National Institute of Standards and Technology (NIST). In the context of border patrol, mistaken identities could lead to “lengthy interrogations, missed flights, and even wrongful deportations,” the group warned.

Beyond the civil liberties and discrimination issues, the civil liberties groups’ objection notes that multiple federal courts have determined Acting Secretary of Homeland Security Chad Wolf’s appointment to his current post was unlawful, which could potentially invalidate all policy changes under his leadership. And while Congress authorized the creation of a biometric entry-exit system in 1996, faceprint technology did not exist then – or in 2004, the most recent year in which that system was reauthorized and transferred to the DHS. Indeed, the use of faceprints was specifically designated an expansion of the previously-authorized biometric systems in 2018 – an expansion that has not been authorized.

While the ACLU cites China as an example of a facial recognition dystopia, the US itself may already be collecting faceprints from unsuspecting visitors and residents alike. The Office of the Director of National Intelligence put out a call last year for technology that might help government surveillance overcome the obstacles posed to facial recognition by distance, difficult angles, and unconsenting subjects – including by piecing together other biometric identifiers like gait. And while CBP supposedly scrapped a plan to force Americans to submit to compulsory biometric scans upon returning to their own country last year, historically such programs have a way of resurfacing. 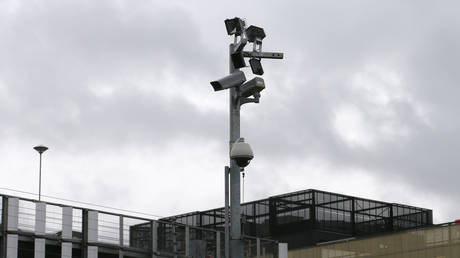