By Binsal Abdulkader ABU DHABI, 11th January 2021 (WAM) – “Sea has never been boring to me over these sixty-two years. It teaches you something new every day. That’s why I never want to stop going to the sea.”

Ahmed Mohammed Al Hammadi, a 70-year-old Emirati fisherman, who started fishing when he was eight, does not have any plans to stop exploring “fresh mysteries of sea until my last breath.”

“There is a belief among us that a boy becomes a real man when he gets the touch and taste of sea salt,” he tells Emirates News Agency (WAM), showing his strong hands at his stall, which displays traditional fishing methods at Sheikh Zayed Heritage Festival in Abu Dhabi.

“I feel fishing and love for sea are in my blood!” he goes on to say enthusiastically.

However, he is missing the challenges of fishing when he was young. “There was no technological equipment to support us and we were following the Sun during the day and stars at night!”

But now, he believes, everything is easy. “Navigation system makes the trip easier and safer. Weather forecast has taken away the uncertainty from our life.”

In the past, sometimes heavy winds made the sea turbulent, leaving the fishermen to the mercy of nature. The living conditions were also equally challenging. He says he had to start fishing at the age of eight to support his family.

“The situation was different then. Fishermen had to go for fishing every day, if they wanted to have food,” Al Hammadi recollects. “Sometimes we may have lunch but not dinner [if there was not enough catch].”

But the situation changed when the government started implementing various support and welfare measures for fishermen, he says.

Al Hammadi cherishes the support of the late Sheikh Zayed bin Sultan Al Nahyan, the Founding Father of the UAE, to the fishermen community.

“Now the government makes it sure that we get a regular income through their support measures,” he says.

Al Hammadi, the father of 13 children – six men and seven women – is happy that his sons also love fishing. “They go for boat racing and fishing competitions as well.”

He enjoys talking about traditional fishing to visitors at Sheikh Zayed Heritage Festival in Al Wathba. The Festival began on 20th October 2020 and will continue to receive visitors until 20th February 2021.

Named in honour of the late Sheikh Zayed bin Sultan Al Nahyan, the Festival celebrates the country’s cultural heritage and showcases the rich diversity of its traditions.

The Festival welcomes more than a million visitors of various nationalities every year.

WAM/ Ibrahim ShukrallaWAM Feature: ‘62 years into fishing, I want to explore mysteries of sea until my last breath’ 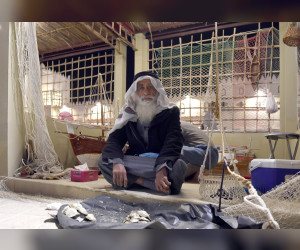