ABU DHABI 10th January, 2021 (WAM) — The Western Balkan region in south-eastern Europe and the Arabian Gulf are thousands of kilometres apart, but a common interest builds bridges between the peoples of these two distant cultures.

“The moment some visitors see on the board ‘Bosnia,’ they ask, ‘Do you have Bosnian coffee?’ “ says Meliha Pasic, a sales executive at a shop in Bosnia-Herzegovina pavilion at the Sheikh Zayed Heritage Festival in Abu Dhabi.

“Coffee lovers among Emiratis, other Gulf nationals, Asians, North Africans and Europeans immediately find coffee as a common topic to strike a conversation with us.”

Coffee enthusiasts among Emiratis and Gulf nationals “usually and curiously” ask about the difference between Bosnian coffee and Turkish coffee, which is “one of their favourite types of coffee,” she tells Emirates News Agency (WAM) while serving hundreds of visitors at the Festival being held in Al Watbha, around 30 minutes’ drive away from Abu Dhabi city.

Pasic explains to them the Turkish influence on Bosnian coffee. The Ottoman Empire, which ruled the Balkan region for several centuries since the 14th century, had left their coffee as a cultural legacy in the region.

“That’s an influence only. Ours is different from Turkish coffee and we have our own typical way of coffee making,” she says while making a Bosnian coffee.

“We use Brazilian coffee beans, but what we claim is our own way of coffee making!” Pasic continues while the coffee foam breaks out from the cup placed on the hot stove.

Most peoples in her neighbouring countries in the Western Balkan region – Croatia, Serbia, Montenegro and North Macedonia – make coffee in a similar way, however, “there may be a minor difference only,” she explains.

“After all, we all belonged to the same country in the past,” Pasic refers to the disintegration of former Yugoslavia into multiple states.

“So, what you taste in this coffee is a [Western] Balkan taste that gives you the flavour of our entire region. I am happy to see that people living in this part of the world love our coffee,” she continues with her eyes wide open.

The shop owner, Suad Dudic, who does not speak Arabic or English, finds it easy to communicate with visitors because of the cultural affinity.

“It is the language of coffee that links him with visitors,” Pasic says.

Some Arabic words have been incorporated into their mother tongue Bosnian, which also help them in their communication with Arabic speakers.

“For example, since the origin of the word ‘Coffee,’ we call it ‘Kahwa’ in Bosnian, whereas Arabs call it ‘Gahwa,’ ” she explains.

These cultural and linguistic links have encouraged Dudic, a Bosnian businessman, to set up his stall at Sheikh Zayed Heritage Festival for the sixth consecutive year.

He first came to know about the festival through the farming community in Bosnia, which was receiving various sorts of support from Khalifa Bin Zayed Al Nahyan Foundation.

He collected local farm products such as honey, juices, jams and herbal medicines and travelled to Abu Dhabi six years ago and continued to do so every year.

Pasic, a marketing executive who has been living in the UAE for the past seven years, started assisting Dudic at his stall since last year’s festival.

“We will continue to come here,” she says.

Named in honour of the late Sheikh Zayed bin Sultan Al Nahyan, Founding Father of the UAE, the Festival celebrates the country’s cultural heritage and showcases the rich diversity of its traditions.

The events at the festival aim to inspire the dissemination of values of harmony and coexistence. The Festival welcomes more than a million visitors of various nationalities every year.

The Festival under the slogan “UAE: The Crossroad of Civilisations,” features 3,500 international cultural events, and hosts 17,000 participants and exhibitors from 30 countries around the world.

Strict precautionary measures are in place at the festival venue to prevent the spread of COVID-19. 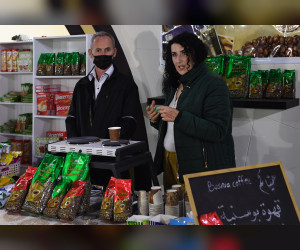 ‘We will NEVER, ever surrender,’ Trump says in Georgia at first rally since Election...