ABU DHABI, 3rd March, 2021 (WAM) — As thousands of hotels across the UAE are getting ready this year to welcome Dubai Expo 2020 guests and delegates, the BOAC Rest House remains dearly in the memory of the nation as the first hotel to be built in the 1930s.

In today’s standards, the number of branded hotel rooms in the UAE are expected to reach up to 108,300 by the end of 2021, according to a report by the international professional services and investment management company Colliers.

However, these massive numbers representing world-class facilities had a humble beginning with the very first facility established during 1932-33 at the Sharjah airfield.

Imperial Airways, which later merged with British Airways to establish the British Overseas Airways Corporation (BOAC) in 1939, originally constructed the BOAC Rest House in response to the need for an overnight stop for its airliners on the western Gulf air-route to India, according to an article in Liwa, a journal published by the UAE’s National Archives.

For nine months, while the building was under construction, overnight passengers used a tented camp. One wing of the foursquare defensive fort was allocated to guest rooms. It appears to have had six single rooms and three double-rooms, with a capacity of twelve persons, says the article written by Nicholas Stanley-Price, an archaeologist with expertise on the Eastern Mediterranean and the Middle East.

The building also had five additional rooms that were built in 1935 for the Indian members of the Meteorological Service. However, the writer has not elaborated on their role at the airfield.

Only hotel in Trucial State

Sharjah, along with neighbouring emirates, was then part of the Trucial State, which was a collection of various sheikhdoms that allied themselves to the British through a number of treaties until the formation of the UAE in 1971.

In 1947, the British Overseas Airways Corporation (BOAC), announced that it no longer needed to stopover at Sharjah and the last BOAC flying-boat left Sharjah on 10th January 1947, says the National Archive’s journal.

On BOAC’s withdrawal during 1947-48, a new company, International Aeradio Limited, took over the Sharjah airfield as an important station for air traffic control in the Gulf. It remained the only hotel in the Trucial States until the 1960s.

Many visitors to the Trucial States in the 1950s and 1960s referred to the BOAC Rest House at Sharjah airfield as the only accommodation available in the vicinity of Sharjah and Dubai, Stanley-Price writes.

The Rest House also served other visitors such as Bahrain-based British diplomats on their duty tours of the Trucial Coast, which became more frequent in the post-second world war period, as well as businessmen and entrepreneurs who visited Sharjah and Dubai.

For visiting businessmen and others, it was the only lodging “to Western standards” that was available near Sharjah or Dubai, some 20 km away, writes the author.

The Rest House had indirectly contributed to the establishment of what became the British Bank of the Middle East and the Al-Maktoum hospital in Dubai.

While waiting for these institutions to be constructed in Dubai, some of their personnel lived at the airfield and commuted into either Dubai or Sharjah.

Founder of the Dubai-based British Bank of the Middle East, Mark Stott, and Desmond McCaully, who had set up Al-Maktoum hospital, lived for extended periods at the Rest House, Stanley-Price reveals.

He also names some prominent guests at the Rest House during a two-week period in November 1949, such as Colonel Moody, a medical advisor to the Political Resident and Political Adviser on the Trucial Coast, and the explorer Wilfrid Thesiger.

The author has quoted the novelist Hammond Innes in 1954 as saying that the Rest House was “no more than an airport transit hotel. For a desert hostel it is incredibly good” while guessing that one day Sharjah would be a colourful winter resort for the rich travelers.

Around 1957, the oilman and explorer Wendell Phillips arrived in Dubai to be told that the only real accommodation was the BOAC Rest House.

Only air-conditioned hotel until early 1960s

In the 1960s an Egyptian journalist, Salim Zabbal, called it the “only hotel in all the Trucial Coast that provided a good meal and an air-conditioned room for sleeping.”

Stanley-Price notes that the Airlines Hotel in Dubai, opened in 1961, was not air-conditioned.

The construction of modern hotels in Sharjah had to wait until the end of the 1960s when three opened – the Seaface on the waterfront, in the former residence of the British Political Agent, the Sheba in the new town, and the Carlton, which is still operating today, near the beach in the al-Khan area, says the National Archive’s journal.

The National Archives was originally established in 1968 under the name of “Documents and Research Bureau” with the objectives of collecting documents and information relating to the history and culture of the Arabian Gulf states in general and the UAE in particular, from primary sources in Arab and foreign countries.

It is one of the oldest cultural institutions in the UAE and the largest organisation of its kind in the Arabian Gulf region. In addition to its role in documentation and archiving, the National Archives provides intellectuals with a variety of publications, including Liwa journal, that explore both authentic cultural and contemporary issues in history and heritage. 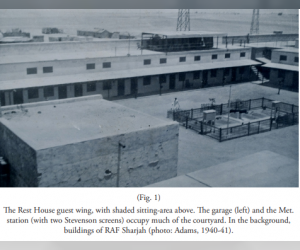 FDOH reports over 4K cases of COVID-19 on Tuesday