The number-three House Republican, Liz Cheney, said she will vote to impeach President Donald Trump over the Capitol riot, becoming the latest GOP member to back the move while stoking both joy and outrage from observers online.

Cheney (Wyoming), the third ranking Republican in Congress, issued a statement on Tuesday declaring her support for the Democrat-led impeachment drive, citing Trump’s response to the “violent mob” that stormed the US Capitol last week while arguing “There has never been a greater betrayal by a President of the United States.”

“None of this would have happened without the President. The President could have immediately and forcefully intervened to stop the violence. He did not,” she said, adding that Trump “summoned this mob, assembled the mob, and lit the flame of this attack. Everything that followed was his doing.”

I will vote to impeach the President.

The announcement prompted heated dispute among netizens, with some, including many typically critical of Cheney, hailing the decision as “brave” and a way to “unite the country” following the violent disturbance in Washington, DC last Wednesday.

“Good for Liz Cheney. She is putting the country over her party,” one user wrote, while another reluctantly celebrated the hawkish lawmaker: “Liz Cheney as the person doing the right thing? That’s dark. That’s real freakin’ dark.”

I’m applauding Liz Cheney too. We disagree on issues. But she’s standing up for democracy and the Constitution. And it’s brave; her district is Wyoming. https://t.co/wIR0jrxg9m

Liz Cheney says she will vote to impeach Trump.

She’s one of the most conservative members of the House.

Her dad can still eat a bag of dicks, but today, she gets a pass.

Cheney. McConnell. And essentially every Democrat and Independent. Seems like it’s uniting the whole country except the insurrectionists and those Republicans who hitched wagons to Trump.

Critics from all over the political spectrum also met the news with jeers, with right-wing commentator Michelle Malkin castigating Cheney as “despicable” and “the enemy within,” while progressive journalist Jeremy Scahill quipped: “Let me know when Liz Cheney supports prosecuting her dad. Until then, she can quit with that opportunistic press release” – referring to her father, former Vice President Dick Cheney, who helped launch the disastrous 2003 invasion of Iraq.

Let me know when Liz Cheney supports prosecuting her dad. Until then, she can quit with that opportunistic press release.

in a statement liz cheney condemned the president for leading an invasion of the us capitol, insisting that’s only acceptable when we do it to other governments

Other detractors saw the move as opportunistic, suggesting Cheney might have a future presidential bid in mind, or is concerned that high-dollar donors are “jumping ship” in the fallout of the Capitol Hill riot, which left at least five dead in its wake.

This is about money. She tolerated trump and his insanity. Now the donors are jumping ship. So is she.

Please note: the money spigots start to shut off and suddenly Mitch, Liz and others are speaking up.

Cheney became the second House Republican to join the renewed impeachment effort, after New York Congressman John Katko voiced support earlier on Tuesday, insisting he “cannot sit by without taking action” and “will vote to impeach this president.” Soon after Cheney’s statement, Illinois Rep. Adam Kinzinger also jumped on board, reasoning that Trump “encouraged an angry mob to storm the United States Capitol to stop the counting of electoral votes.” Michigan legislator Fred Upton became another GOP member to turn his back on Trump as of Tuesday night.

The GOP defections have prompted predictions that others in the party would soon follow suit, some commenters outright encouraging them to do so, while others suggested Cheney’s stance could provide “cover” for fellow Republicans.

I think with the Liz Cheney announcement, we will see a cascade of republicans signing on to impeach. #beans

For those Republicans who fear their own constituents: Liz Cheney lives in Wyoming. If she can do this, you weenies can do this too.

Some in the conservative commentariat pushed back, with Human Events editor-in-chief Will Chamberlain arguing that Cheney – who has repeatedly attacked Trump on a variety of issues – could not provide political camouflage for impeachment-supporting Republicans.

Republicans cannot be this dumb

LIZ CHENEY DOES NOT GIVE YOU POLITICAL COVER https://t.co/sqAOpnH2ys

Senate Majority Leader Mitch McConnell, however, may better serve that purpose, with the New York Times reporting on Tuesday that the GOP leader has told associates he believes the president committed “impeachable offenses” and that he is “pleased” with the drive to force him out of office. Though he has not backed the move publicly, McConnell’s wife, former Transportation Secretary Elaine Chao, resigned over the Capitol riot last week, calling the event “traumatic.”

Democratic lawmakers moved swiftly to threaten impeachment following the unrest in DC, vowing to move ahead on the effort if Vice President Mike Pence fails to invoke the 25th Amendment to remove Trump from office. With the VP refusing to do so, Democrats say they will force a vote on Wednesday on one article of impeachment, accusing the president of “inciting” the riot on Capitol Hill. 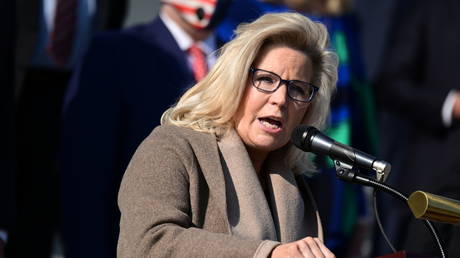