An elementary school in Washington state has walked back a policy requiring kids to wear face masks “to chew, swallow, or talk” at lunchtime, after some outraged parents complained about the bizarre rule.

Kids returning to Geiger Montessori School in Tacoma, just outside Seattle, this fall were greeted with a bizarre Covid-19 protocol. In an email to parents, the school advised that children would be spaced out in a ventilated cafeteria, and could remove their face masks “only to take a bite or drink.”

After placing food in their mouths, the kids were then asked to raise their masks “to chew, swallow, or talk,” KTTH reported. One parent complaining to KTTH said that the rule was “insane,” and KTTH reached out to the school. The school said that the rule was based on guidelines from the Centers for Disease Control and Prevention (CDC) and the Washington State Department of Health.

However, the Washington State document states that “students may remove face coverings to eat and drink” and further specifies that they should abide by social distancing rules when “masks cannot be worn, such as when eating lunch.” The CDC guidelines make no mention of masking at lunchtime, except for stating that students have to mask up “when moving through the food service line.”

With KTTH pestering them, Geiger Montessori officials walked back the policy, describing it as a “good faith” interpretation of the guidelines. A spokesperson for the school added that going forward, “we won’t discipline any students for not wearing their masks between bites.”

Elementary school children are at an extremely low risk of serious illness and death from Covid-19. Only 464 children aged between 0 and 17 have died of the disease in the US, out of a total of 672,000 deaths, per CDC figures.

Similar policies have been enacted in other educational settings across the country. Stanford University reminded its fully vaccinated students on Wednesday that they must remain masked while playing basketball, telling them to “adapt your intensity as needed” to cope with the inevitable breathing difficulties. Virginia Commonwealth University suspended its own recreational basketball activities on Wednesday, citing non-compliance with a similar mask rule. 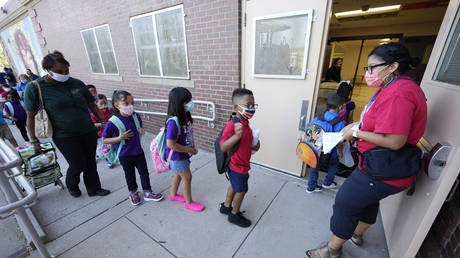