According to a police statement, Sicknick returned to the division office after clashes with a ragtag group of Trump supporters who stormed the Capitol building on Wednesday, but he later collapsed and was rushed to hospital for emergency treatment. He died shortly after from his, as yet, undisclosed injuries.

Video shared on social media purports to show a massive contingent of police conducting a night-time vigil for the slain cop, which featured a motorcade of police vehicles lined up in front of the Capitol and a lit-up police convoy which paraded past the Washington Monument in the early hours of Friday morning.

Police honoring officer Brian Sicknick who died tonight from injuries he suffered during the assault on the Capitol pic.twitter.com/b5nGUIRkda

An investigation into Sicknick’s death has been launched by the DC Metropolitan Police Department’s homicide division in collaboration with the Capitol Police and various federal agencies.

At least 50 charges have been brought against several people who participated in the riot, and the Justice Department has stated that charges of sedition and insurrection are also being considered.

Capitol Police Chief Steven Sund resigned in the wake of the incident, while the officer involved in the fatal shooting of a Trump supporter during the riot has been placed on administrative leave pending an investigation. 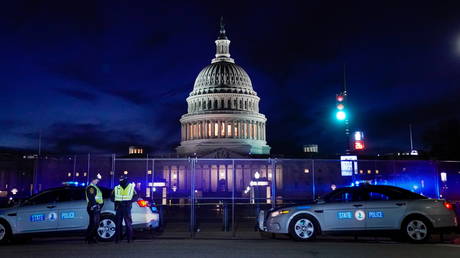