New York Gov. Andrew Cuomo may have given special permission to the Buffalo Bills to have in-person attendance at their upcoming playoff game, but thousands of fans are telling him they don’t want him anywhere near the stadium.

Jeffrey Dorenzo, who organized the Change.org petition, blasted Cuomo for his already-announced plans to attend the game on Saturday.

“So Cuomo is going to attend our playoff game after telling us that we can only attend at less than 10% capacity?” he wrote.

“If he thinks he has more right to a seat in that stadium over people who have waited over 20 years for this opportunity, then people better be there to protest his entry,” he said.

The petition has over 25,000 signatures as of this writing, around 10,000 of which came on Tuesday when the petition got attention on social media from notable Cuomo critics.

Is it terrible for me to admit that a little part of me wants to see the governor of New York boo’d at the @BuffaloBills game?

Andrew Cuomo should be IMPEACHED!! https://t.co/LNL0UFIk0T

I love this! 😂
Add @NYCMayor to the list too!

Ban them from every business that suffered in NY as well.

Cuomo, an outspoken Bills fan, was slammed by many for his decision to allow over 6,000 fans to attend the upcoming football game, as much of New York remains shutdown with numerous businesses remaining closed due to the state’s pandemic restrictions.

As part of the conditions for in-person attendance to the game, fans will need to provide a negative Covid-19 test that was taken within 72 hours, and health officials will conduct contact tracing after people leave the stadium.

NYS, @NFL and @BuffaloBills have come to an agreement to allow ~6,700 fans to attend the first home playoff game.

The stadium is outdoors. Every fan must test negative before game, wear a mask & social distance.

Calls for Cuomo to be banned from attending the game follow a number of New York restaurants announcing the governor was not welcome in their establishments in reaction to the lockdown orders, which have hit the dining industry especially hard. 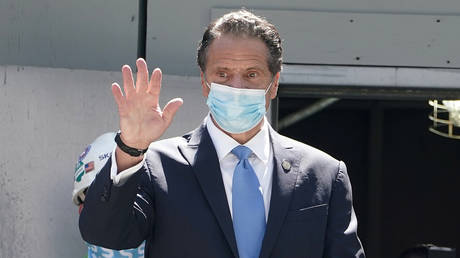