Three defendants who were allegedly part of an extremist plot to kidnap Michigan Governor Gretchen Whitmer to spark a civil war have been slapped with new weapons of mass destruction charges, the US Department of Justice has said.

The trio, who were already charged with kidnapping conspiracy in October last year, allegedly conspired to blow up a bridge near Whitmer’s home in order to frustrate her security detail and hamper the police response, according to an indictment filed on Wednesday.

Federal prosecutors also say the men staged the storming of a building in training drills and hatched plans to fight security guards using “improvised explosive devices, a projectile launcher, and other weapons.”

Prosecutors also claim Harris boasted about being a Marine Corps infantry veteran who “can make things go boom if you give me what I need,” in a message related to joining the Wolverine Watchmen militia group.

The far-right anti-government militia group is believed to have links to seven of the 13 men originally charged over the plot on Whitmer.

The indictment filed on Wednesday also charged Croft and Harris with the possession of an unregistered semiautomatic assault rifle.

The Justice Department said that another of the defendants, Ty Gerard Garbin, the leader of the Wolverine Watchmen, faces a sentence of up to life in prison after he entered a guilty plea to the charge of conspiracy to kidnap Whitmer in December. He is awaiting sentencing.

Prosecutors claim Fox recruited Garbin and other members of his group to join the conspiracy. The men are said to have engaged in combat practice, including using semiautomatic assault rifles with live ammunition and explosives.

Defendants Fox, Croft, Harris, Kaleb Franks and Brandon Caserta each face up to life in prison if convicted of the kidnapping conspiracy. 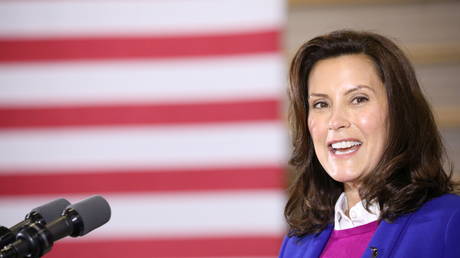 Extra-rare blue moon coming this weekend: Here’s how to see it

Health workers once saluted as heroes now get threats

Man pleads guilty in fatal shootings of 8 from Ohio family