As illegal border crossings surged to new highs every month this year, Homeland Security chief Alejandro Mayorkas insisted there was no “crisis.” But behind the scenes, he admitted that the US was “going to lose” at the border.

The US Department of Homeland Security announced on Thursday that border agents have caught a record number of migrants attempting to illegally cross the US-Mexico border in July, with more than 212,000 individuals stopped. Announcing the dramatic figure, Homeland Security Secretary Alejandro Mayorkas called the situation at the southern border “one of the toughest challenges we face.”

Since Joe Biden took office and shredded nearly all of Donald Trump’s tough immigration restrictions, every month has seen record numbers of migrants attempting to enter the US, leading to overflow at detention facilities, and large numbers of arrivals – tens of thousands of them reportedly infected with Covid-19 – shipped inland to American cities on buses and airplanes.

Conservatives have for months labeled the situation at the border a “crisis,” but Mayorkas has refused to give in and use this term in public, preferring the more neutral “challenge.” However, he has struck a more defeatist tone in private.

“A couple of days ago I was down in Mexico, and I said look, you know, if, if our borders are the first line of defense, we’re going to lose and this is unsustainable,” Mayorkas told Border Patrol agents in Texas on Thursday, according to leaked audio obtained by Fox News. “We can’t continue like this, our people in the field cant continue and our system isn’t built for it.”

Mayorkas also told the agents that he was aware their sector of the border came close to “breaking” in recent weeks, and that it was the Biden administration’s “responsibility to make sure that that never happens again.” To that end he promised to secure additional hazard pay for the agents and to hire 2,000 new agents under his department’s 2023 budget, Fox reported.

One of the agents reportedly told Mayorkas that the solution is simpler. “We don’t need to reinvent the wheel,” Fox quoted the agent as saying. “We’ve had this happen before. We know exactly how to shut it down. We need to make illegal entry illegal.”

Since taking office, Biden has made it easier for migrants to enter the country. He eliminated his predecessor’s ‘Remain in Mexico’ policy, which mandated that prospective entrants apply for asylum or entry to the US from Mexico instead of approaching the border. He reinstated ‘Catch and Release’, a policy whereby migrants apprehended at the border would be detained, summoned to a court hearing at a later date, before being released into the US. With wait times of up to three years, only around half ever show up, according to an immigration official with the Justice Department. However, these figures are the subject of partisan dispute.

Mayorkas told the agents that the Biden administration was seeking to keep in place Title 42,  a Trump-era order allowing for the instant expulsion of adults and families to curb the spread of Covid-19, and is pushing for deportation flights into Mexico to prevent repeat crossing attempts. These moves, along with his promise of hiring more agents, sets Mayorkas and his administration up for a clash with the more progressive wing of the Democratic Party, who have called for budget cuts to the US’ immigration agencies, while activists have filed lawsuits to end the enforcement of Title 42, even as conservatives say the Biden administration isn’t using it enough. 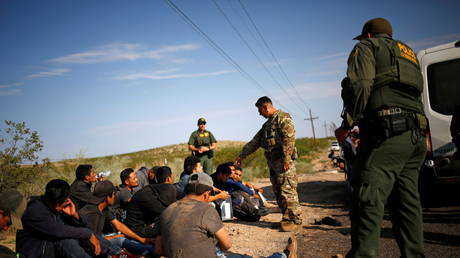 ‘It’s not a problem in Washington’: AOC’s ‘aunt’ says Trump not to blame for...